Give thanks with a grateful heart

I can't tell you the weight that's been lifted from my shoulders!
LOL
A happy weight, but I was so afraid I wouldn't get this quilt done by June 2nd.
Mom's next chemo treatment. 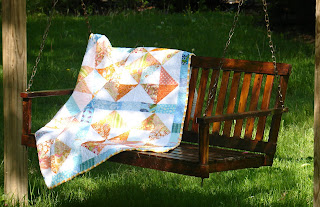 I shared it on Flickr this weekend and got so many kind and happy wishes for my mom.  Bless you all for making me cry.  Cancer touches so many people.  It is not a respecter of persons.  Age.  Gender.  Social status.  It just doesn't care.
That's where we as people have to.
Care.
To pray.  To live where people hurt.  To be there for them.  To share in their pain.  Rejoice in their victories.
Chemo isn't pleasant.  You can have chills, itches, aches, pain, hair loss, weight loss...I've watched my mom have all of these.  The chemo she's on now deposits calcium in her kidneys.  So, kidneystones.  LOL  She's had one hospital stay and procedure, and will need another in the next few months.
I just got a call from my dad that she's out of the surgery to have a port put in and is in recovery.  She should be home later today.  Medicine can be amazing! 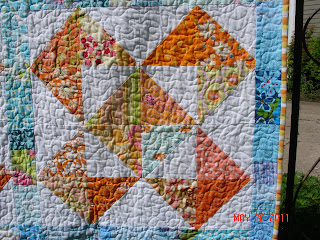 The name of the quilt is "Thankful".  Because even through it all, that's what our family (especially me) is.  We've been blessed with time.  Time for her to laugh.  To watch her grandkids grow and have milestones.  Time to see our oldest graduate from high school and start college.  Time to watch Middleman grow and mature into a young man she is proud of.  Time to help Bean dig up "treasure" in hers and Dad's backyard.  Time to just go shopping and out to eat. 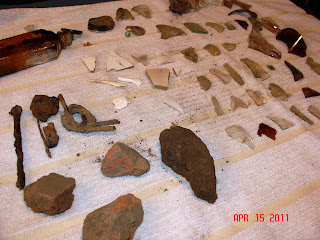 I'm also thankful to the wonderful ladies of the IMQG who donated their time and talents to help make the blocks for me.  This quilt will be wrapped up in as pretty a package as I can make it and sent along with my mom June 2nd.  I'm asking her to give it to the nurses who will then gift it to another patient there to take home and hopefully bring back during their chemo treatments. 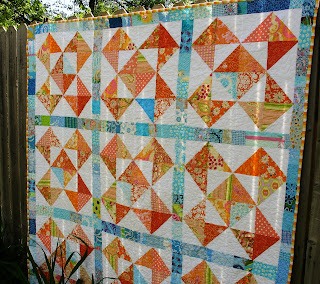 This is a nice lapsized quilt.  No dragging on the cancer center's floor, but big enough to help keep the chills away.  I used just a plain white sheet that had been washed enough times to make it as soft as a cloth diaper.  The medicines used can make a patient's skin very sensitive and I wanted somethings as close to soft as a baby's bottom on the back of the quilt.  A couple of weeks ago, I found a vintage sheet at Goodwill that I just knew would be perfect for the binding.  I didn't cut on the bias, thinking the slanted lines would make an already busy quilt, that much "tiltier".  lol  Just a meandering quilting stitch used since some of the blocks didn't come back quite square or the same size.  That's okay.  It's one of the reasons I love quilt so much.  They are unique in their creation. 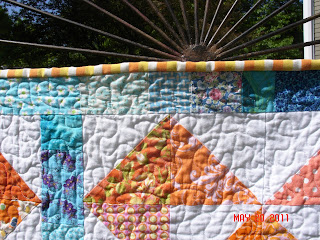 Can you see why I'm calling the sheet the "candy corn" sheet?  I'm so pleased to have this project finished and ready to go to its new home.  I'm so thankful, that yet again today, God has shown His care and love for my mom and my family.
Enchaned Tas captured beautifully what I'm hoping to give to someone in this quilt, "it screams sunshine, blue skies and love! And I can imagine it drawing in beautiful, fresh air and positive vibes as it sits in this lovely location! I can only hope it delivers the beautiful vibes I see!!"
It's like she saw into my heart and soul. Thankful for your many prayers and well wishes for us.
﻿
Posted by Dee at 6:20 AM 11 comments:

﻿and I just can't tell you how excited I am!  All of the ladies who participate just inspire and encourage me to take a look at what's in the "to do" pile and work on something with the goal of finishing it off faster than if I wasn't taking part in WIP Wednesdays.
This week I've been working on quilting the Quilts of Comfort quilt.  This is a quilt that when finished, will be donated to a cancer patient at our local cancer center. 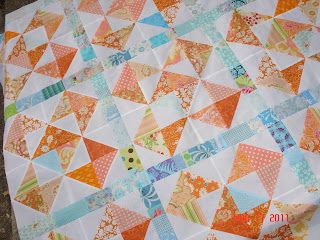 Here it is before the outside sashing has been completed and sewn on.
The nurses have told me they will pick out a patient they know will really love and appreciate the thought and wishes behind the quilt.  The huge hearted ladies from the IMQG graciously lent their hands and creativity to make the blocks for me in our bee.
Last week I had two requests to showcase a block and a quilt.
Melanie from Sew, Mama, Sew! did a blog entry for them on What's New?~Sewing Trends focusing on color palettes.  She asked to use my Vintage meets FMF block for "Sunshine".
I'm so tickled that the block is with other vintagey, quiltey goodness.  Definitely good company!

Then, Heather from Modern Day Quilts asked to share the back of the Robert Kaufman challegen quilt on her blog which features one modern quilt a day.  There are some fabulous and outrageously gorgeous quilts on there!  The diamonds in Bohemian Quilt are just breathtaking!

So for the week, no new fabric bought, but I need thread!  lol
No new projects and the quilting on the Quilts of Comfort is coming along nicely.

I've also been able to spend time the last two days outside working in our flower gardens.  Splitting hostas, planting perennials, hanging Mother's Day baskets, and tidying up the yard.

A good week all in all.
I'll be joining up with Lee at Freshly Pieced to share my quiltey progress and see what all the other ladies have been up to!  You should check out Lee's post on her Mod Times quilt.  I love the colors and the tranquility that just oozed from this quilt.

Blessings and springtime blossome to you all!
Posted by Dee at 12:05 AM 19 comments:

"In springtime, the only pretty ring time, birds sing hey ding, a-ding, a-ding. Sweet lovers love the spring."
a fave song of mine from Willy Wonka and the Chocolate Factory 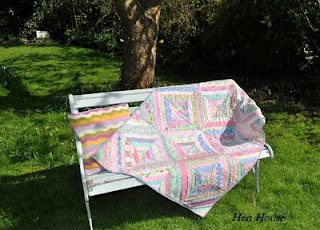 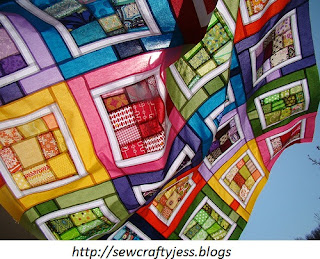 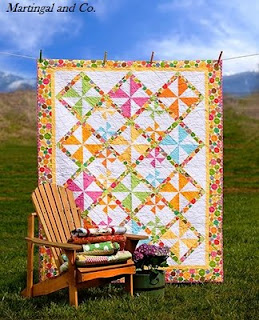 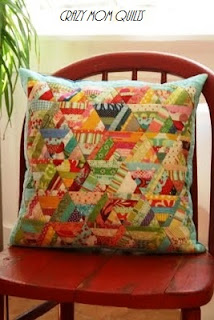 Any one of these lovelies could come and visit at my house!
Posted by Dee at 5:56 AM 2 comments:

I stink at certain types of improv.
Really.
No, no.  It's okay.
The IMQG bee is in full swing.  I have only received half of my blocks back, but I'm hopeful.
I made this block for the month of April.
This was a block I thought wouldn't require a lot of thought, but it did.  Probably doesn't help I had a headache while I was piecing it.  Do you see my mistake?  Ratz!  Off to the cutting board to rip a couple of seams and insert a couple of strips of white.  They should be bordering the orange and blue on the two outside sections.
Darn!
I had three finishes in one week.  This week, I've managed the block (albeit boogered up) and buying fabric to sash the Stars Over Indiana quilt. 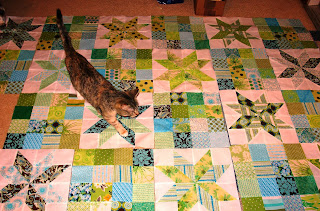 Here's where it was in January of this year.  Still not sewn together and a play mat for a very curious cat. 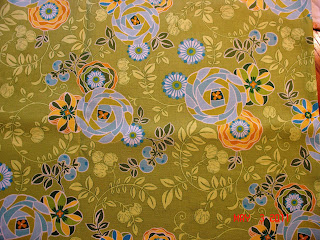 The perfect sashing fabric.  From Joann's.  Purchased with a 50% off coupon.  So I got two yards for the price of one.  Yippee!  Wish my LQS had coupons like this! 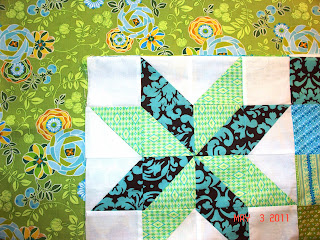 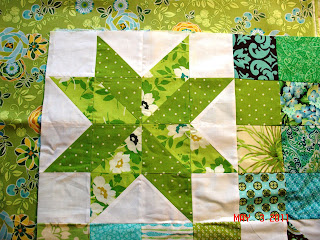 Testing.
Yeah, I like it!
I've been working on the back too.
For the Aloha Quilt 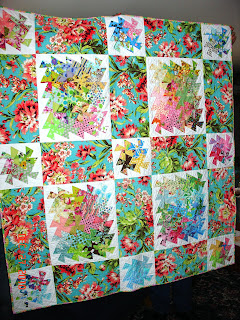 I used a Single Irish Chain for the back. OMGoodness, how pretty is that!  lol  I forget what things look like when they're folded on a chair or I'm lying under them.
This is such a happy, fun and easy way to put more bang in your quiltey buck! 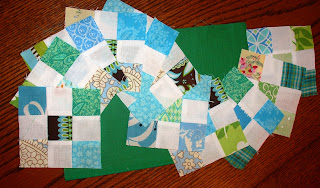 Crusin' along.  Having some fun with nine patches. 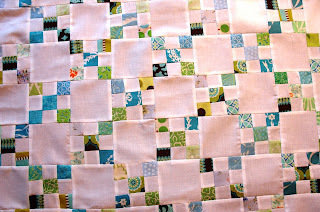 And here they are being pieced together.
I don't think the whole back is going to be this...I'm toying with the idea of morphing the white square in between the nine patches into the blue and green fabrics and switching the five green and blue squares in the nine patches into white.  Make sense?
We'll see.
I've been playing around with diamonds lately ( last month) too.  In pinks and oranges.  I mean, really.  What little girl at heart doesn't just love pink and orange together! 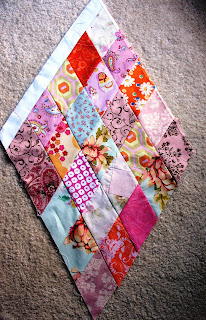 And who could resist a couple of love birds? 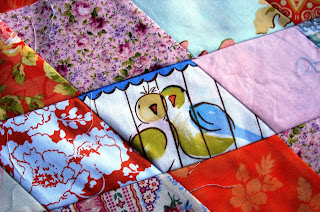 Where is this project going?  I have no idea!  But I'm loving the look of the blocks sashed in white!
This week has also been all about 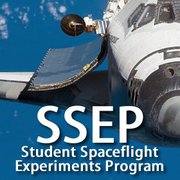 Middleman's Flight Experiment Proposal paper that will be submitted to a panelist of judges in related fields.
He's doing natural food preservatives in space and this paper will go along with several others to be judged, and if it passes, it goes to a national review board who decides which experiment from our community 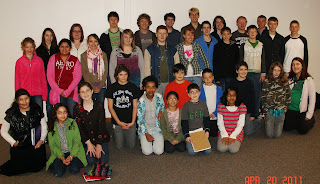 ﻿Avicenna and LLC
will fly on the shuttle Atlantis.  Lots of work to do before the paper is turned in though! 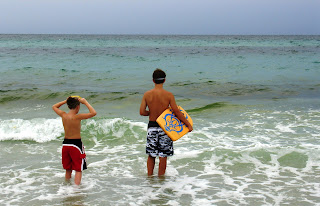 Another finish this week was Middleman's (with the boogie board) Lifeguard certification.  Lots of hard work and studying, and he passed with high marks and new confidence!
Way to go buddy!
This week also marks an end of Javi's freshman year at university. 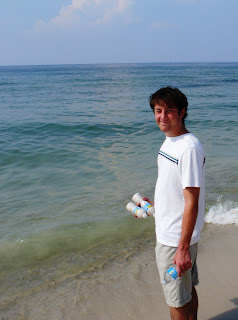 Here he is at Gulf Shores last year.
Here's a really good shot of our family I forgot we had. 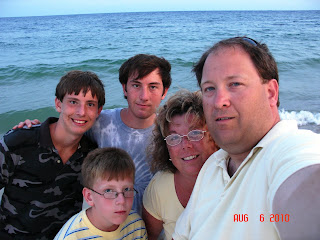 Can you tell which one is me?  LOL
Slowly slogging my way through WIP's with no new projects started.  Fabric bought for the sashing of a quilt and other than that...nothing new added.  Which is good.
Linking up with Lee at Freshly Pieced for WIP Wednesday.
So much fun going on over there!  Each week I find a new favorite (or two) and get inspired!  You should check it out too!
Leaving you with a finish from last week.  A WIP off the list.  Woo Hoo!