I am thinking of officially petitioning God for more hours in the day.
Corrine at the Indianapolis Modern Quilt Guild asked us to make a 12.5" unfinished square using Jenean Morrison's "Moondance".  She asked us use mostly triangles, HST or Flying Geese with half of the square white.  This block was taken from Quilt.com's Block of the Month.  It was September 1997's block, and since Corrine's month was September, I thought it was fitting! 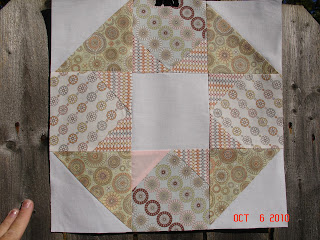 It's called "Dandy" and it was a fun block to cut and piece.  I didn't have quite enough of the clamshell fabric for the inner "star" points, so I supplemented with a complimentary light pink scrap.  I think it turned out well. 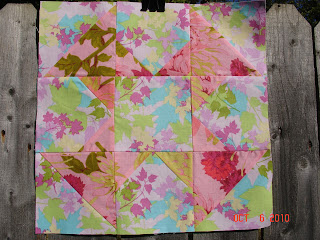 This is the test block I made to check the size and decide how to place her five fabrics.  Martha Negley alongside some fabulous anonymous fabric I picked up at a fabric store while driving to a soccer game.  LOL
Love this combination! 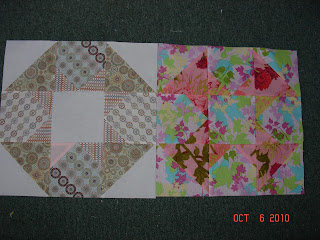 And here are the two blocks, side by side.  Same block pattern, just different fabrics and colors.  Wow!  What a difference!
Thanks Corrine for letting me learn a new block and play with some beautiful fabric.  I hope you like it!
Hubby sweets just called and said they had mowed down by the river and would I like to take a walk?  That's a no brainer on a gorgeous Autumn day like today.
Hope your day was blessed and that tomorrow the sun shines just as bright!
Linking up with Amy's blog for Friday Sew & Tell.  I haven't been there yet this morning, but let me tell you, there's usually some incredible creations and eye popping sewing going on!
﻿
Posted by Dee at 2:06 PM