I have been blessed with three wonderful women who are playing Pay It Forward with me!  KT, I know very well.  And still like, I might add!  LOL

Corrinea and Leslie are new friends I'm excited about getting to know better!

This is going to be so much fun!  Thanks ladies! 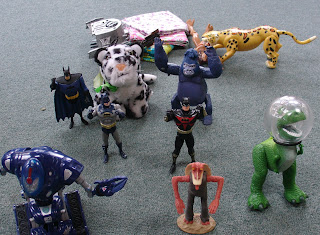 Bean and I wanted to share with you some of the other candidates for stash guard from this weekend's interview.  Turk from Tarzan rode shotgun on the way to the interview with Tarzan.  Apparently, the leopard was stalking them all the way here and as soon as Tarzan wasn't looking, went in for the kill.  One less candidate and a huge stain on the floor.

Jar Jar Binks showed up along with the robot from the "Lost in Space" movie.  They were over at the Mos Eisley Cantina and heard there might be work.

The stuffed leopard was very cute, but after seeing the carnage the other leopard was capable of, my stomach was a little queasy and I was having a hard time believing this cute, cuddly pile of fluff with such a sweet little ribbon could be so mean.  But he ate Ice Batman when no one was looking.  No stain, but lots of pieces on the floor!

The other two Batmen were washouts.  One chickened out when Rexy roared and the other one saw the Bat signal on the ceiling and had to leave for another gig.  Something about saving Gotham? This is Rexy on the job!  Lego Vikings (and their white shark sidekick) raided the stash pile.  Their king is in Rexy's mouth about to become a dinosaur entree and the one in his hand is praying for all he's worth to Odin!  You can see their pals got the idea and are running as fast as they can to escape the jaws of death!

Bean decided to decorate his mini pumpkin from church with a Sharpie.  Don't you just love those things in the hands of kids!  I mean, really.  What a neat idea to be able to color anything and everywhere with a marker that's black...and permanent!  Brilliant!

Although, Bean will get to continue breathing after leaving marks on the table and writing diagonal lines on his shirt because of this 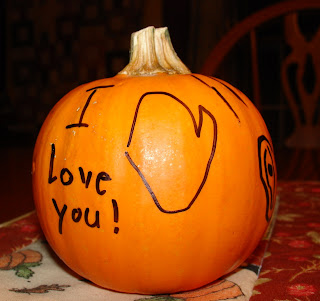 You have to laugh, or you will cry!

Hoping to sew today.  Behind Bean's guilt...er...love offering is a quilt top I'm working on.  I'll share pictures as the week goes by.

Is it Friday yet?