I have done nothing today but lay in bed.

I now know what Bean was talking about when he said his head hurt.

If this is part of the Swine Flu, shoot me now.

Came across some interesting historical facts about quilts and wanted to share them with you.

•The oldest surviving example of patchwork is a quilted Egyptian Canopy used by the queen for festive occasions in 980 BC. It now resides in the Egyptian Museum in Cairo

•As early as the 1300's, Mali warriors wore quilted suits of armor for protection in battle

•In the Sudan, full quilted garments for both warriors and their horses were worn as protective armor in battle

•Until the end of the 19th century, the Fulani calvary wore quilted cloaks (sometime decorated in patchwork) for warmth or ceremonial occasions. They would have been too cumbersome in battle. Under the cloaks, heavy quilted armor (made in several pieces to protect different parts of the body) was worn. These were worn over metal body armour or chainmail.

•Between 1325 AD and 1521 AD, both the Aztecs and Mayans wore quilted cotton body armor (ichcahuipilli) that could withstand a direct arrow impact. The Spaniards were so impressed that they adopted it for their use as well. 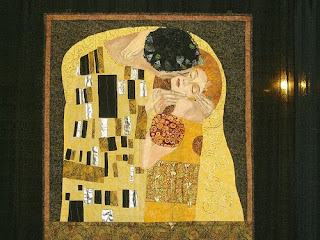 A quilt (don't even ask where I stole this from, 'cause the brain ain't workin') that beautifully captures Gustav Klimt's "The Kiss".