Last week I shared a giveaway from Sew Fantastic.  Remember these little guys? 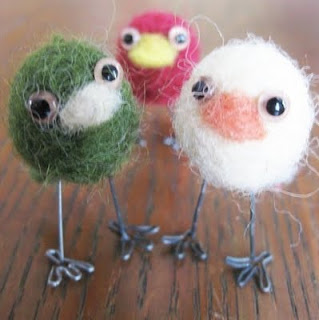 She uses her little critters as "stash gurads" to guard her precious stash of fabric.  Well, I didn't win the gift certificate which would have allowed me to purchase one or two to protect my own favorite pile of precious and priceless fabric. 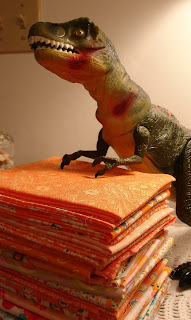 This is Rexy!  Out of all the toys in the toy box, he's the one still walking tall with all his body parts still attached and the battery that makes him walk across the floor and roar is an Energizer!

Rexy previously was a lead character in the "Jurassic Park" movie trilogy and understands the need for strict security on a set.

You might have seen a digitalized version of him in the "Toy Story" movies.  Rexy wants you to know that playing the submissive T-rex was a hard gig for him because he's really quite violent and vicious when situations call for it.

He also auditioned for the "Night at the Museum" movie, but they wanted him to do so au natural, and he's not that kind of dinosaur.

I asked Rexy to roar in front of the Lego Stormtroopers, tough dudes one and all for all that they're clones, and he willingly obliged.

Not a one was standing when Rexy was finished.  Even Batman, also interviewing that day, suddenly remembered that the Batmobile needed a wash and wax.

So, welcome Rexy to the team!

When offered his choice from the selvage bin, he chose Kaffe Fassett. 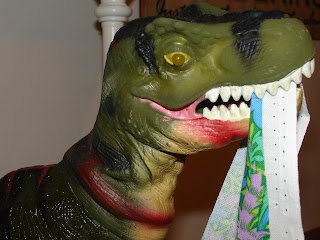 He'll be sleeping in the den, with the dog...who doesn't do fabric security btw. Just cuteness.

I'll let you know how he works out!